How DNA helped me find...all the Brimble children

I have been researching my family history since the early 1980s and in 1989 I completed the Diploma in Family Historical Studies through SAG.  My thesis was based on one of my paternal families - The Brimbles who immigrated to Australia in 1850 from Kingston Deverill,  Wiltshire.

I took a DNA test with AncestryDNA in 2017 and was fascinated to find matches that confirmed my research. I realised what a benefit it would be to test other family members, so subsequently tested my parents and my sister. I have now also tested two aunt’s and have access to several cousins kits as well.


The Brimble and Forward families


My 3 x great grandmother, Isabella Brimble was baptised on 22 Feb 1835 at St Mary’s the parish church of Kingston Deverill, the youngest of 7 known children born to John Brimble and Sarah Forward. John and Sarah had married at Kingston Deverill on 26 May 1817.

Her father, John, a shepherd, was born in 1785 the son of James Brimble and Priscilla Maidment of Kingston Deverill, a village in the Deverill Valley.  The six villages of the valley – Kingston, Monkton, Brixton Deverill, Hill Deverill, Longbridge Deverill and Crockerton – are known as the Deverills.

Her mother, Sarah Forward was born in 1794, the daughter of John Forward and Hannah Mills in the small town of Mere, which is just 6 km away.


At the time I completed my thesis we knew:

The five younger children were still living at home with their parents at the time of the 1841 census. 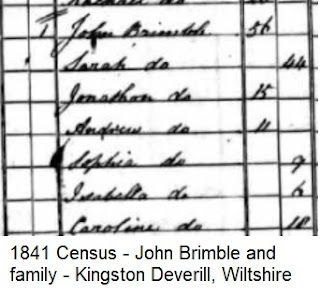 At some point, Sarah and four of her children made the decision to immigrate to Australia but were unable to obtain passage on the same ship.

Sarah, Jonathan and Isabella travelled on the Lord Stanley and arrived in Port Jackson on 26 August, 1850. After their arrival, they made their way to the Newcastle district. 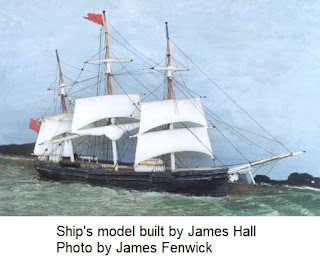 The other two children, Sophia and Andrew, together with Andrew’s wife, Louisa and daughter Emily had obtained passage on the Emigrant which departed from Plymouth in April 1850. No doubt seeking a better life in Australia, they knew nothing of the ordeal that lay ahead as they endured a typhus outbreak on a disease ravaged ship. When the Emigrant arrived in Moreton Bay on 13 August, the nightmare continued as they spent a further three long months in quarantine on Stradbroke Island. 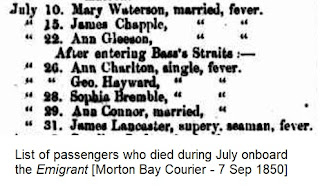 Sophia was not listed on the shipping indents, but she is mentioned in a letter written by the ship's Captain Kemp, which was published in the Moreton Bay Courier, 7 Sep 1850. She died at sea on 28 July, four days after the ship had entered Bass Strait, of fever.


Shipping records indicated that a child named William was born to Andrew and Louisa on 13 August, the same day the ship entered Moreton Bay. He was later baptised as Andrew Brimble on 24 October on Stradbroke Island.

Ironically, although shipping records indicated Andrew Senior's health was good on arrival, he died just three days after his son's baptism. It’s believed that his failing health and imminent death, may explain the change in his son’s name.

Another John Brimble, Andrew’s father’s cousin, was also onboard with his wife Elizabeth and their three children. Elizabeth also died from typhus and their young son, Samuel died from burns he received in an accident whilst they were still in quarantine.

A total of 40 people died of typhus fever, following its outbreak on board the Emigrant. A memorial plaque has since been erected to mark the graves of those who died at Dunwich and during the voyage. 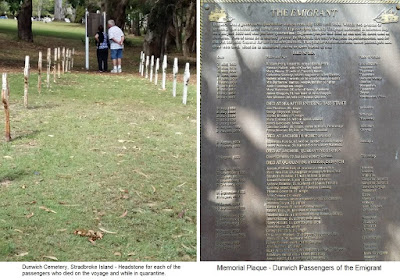 The book, The Tragedy of the "Emigrant" Ship of Death was released last year by Queensland author, Jane Smith.

The Emigrant is also featured in Kerry O'Brien's episode of Who Do You Think You Are as his ancestors were also onboard. 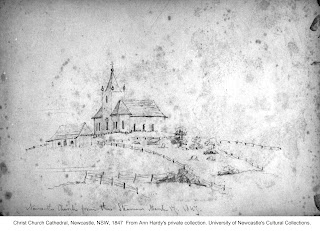 Sarah did not live very long after their arrival in the colony and she died in 1 May 1851 and was buried at Christchurch Burial Ground, Newcastle.

Andrew’s widow, Louisa was reunited with her husband’s family in Newcastle and on 10 Jan 1853, a triple marriage ceremony took place at Christchurch. The first was the marriage of Louisa to James May. The next ceremony was between Isabella and John Court, and the final ceremony between Jonathan and Bridget Egan.

Louisa and James May went on to have 10 children together.

Isabella and John Court had a family of seven children - they are my 2 x great grandparents.

Jonathan and Bridget did not have any children and sadly he died just five years later of stomach cancer.

What happened to the other 3 children?


James and Harriet did not appear on the 1841 census with the rest of the family. At the time I completed my thesis, I had consulted a number of resources that were available, but had no success locating any of them.

Over the years, as more records became available online I was eventually able to find out what happened to James and Harriett.

James married Ann Smith on 02 Nov 1840 at Midsomer Norton in Somerset, his sister, Harriett was one of the witnesses.

He and Ann were living at Stratton on Foss at the time of the 1841 census and then later settled in Midsomer Norton and went on to have ten children.

James died on 13 August 1870 in Midsomer Norton, Somerset, at the age of 53, and was buried in Downside, Somerset.

About a year ago, I noticed my father and his 3rd cousin, PA, had a shared DNA match at both AncestryDNA and MyHeritage with KG. She had a small unlinked tree of 4 people at AncestryDNA, and no tree at My Heritage. I must have felt like a challenge that day, but with birth and death details for her father in the USA, I felt I had enough to make a start on a Quick and Dirty tree.

I was able to trace KG’s maternal line back to her 2 x great grandfather, James Maidment Brimble. James's widow, Ann and 2 daughters, Kate and Eliza had immigrated to the USA in 1877.  Eliza is KG’s great grandmother.

KG also has a number of shared matches with other known Brimble and Forward descendants.


Harriett, was baptised at St. Mary's on 23 May, 1820 the same day as her second cousin, George, the son of John's cousin, Thomas Brimble.

Harriet was found living in Bath as a servant at the time of the 1841 census and she married George Hendershot Saxty in 1844 at St. James, Bath.

Harriet and George immigrated to the USA where they are noted on the 1850 census in New York with their 3 young children who were all born in the UK. They had a further three children.

Her husband, George was naturalised in 1856 and in 1862 enlisted in the Civil War with the 109th Infantry Company of the New York Regiment with the rank of Musician. 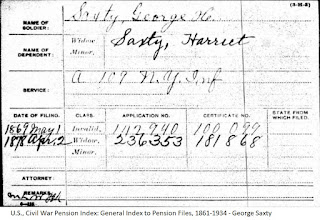 Harriett died in January 1901 having lived a long life of 81 years and is buried at Prospect Hill Cemetery, Washington, DC.

I had contact with a descendant of this branch of the family about 15-20 years ago after I had put my thesis online. However, more recently I’ve been able to confirm another 5 DNA matches on this line, including the daughter of my previous contact, which was nice to reconnect.


One afternoon, late in 2018 I decided to do some surname searches of our AncestryDNA matches to see if there were any new results.

I found a new match - BB - who had a tree, and I could see that she descended from Harriet Brimble. She was a shared match with my cousin, and also with another match, ED.


I'd been in contact with ED who was from Canada, when I first got my results some 18 months earlier, but at the time, we had no shared matches and couldn't see a connection.

I decided to have another look at her tree. No surnames or locations stood out, but I noticed she had a Caroline about the right age in her tree … the wife of Robert Welch and they had a daughter, Elmira born in Toronto, Canada.


Our Caroline was baptised on 21 April, 1822 and appeared on the census for Kingston Deverill in 1841 with her parents and siblings and was described as 18 years of age, and a Farm Servant.

I went back to my notes on Caroline Brimble - I had searched marriages and deaths years ago, without any luck. At some point, I had also searched the English census for any Caroline's born about 1822 in Kingston Deverill - and had actually found a Robert and Caroline Welch living in Limpley Stoke, Wiltshire with three children. I hadn’t pursued this any further as I couldn’t find a marriage for this couple and searches of subsequent English censuses for this family had proved unsuccessful.

I then remembered that the GRO Indexes now include the mother's maiden name and found births for Jane Brimble, James Welch and William John Welch. All occurred in the Bradford Union which corresponded with the family I had identified on the 1851 census.

Jane and James Robert were baptised together at Limpley Stoke on 7 July 1850 the children of Robert and Caroline Welch. 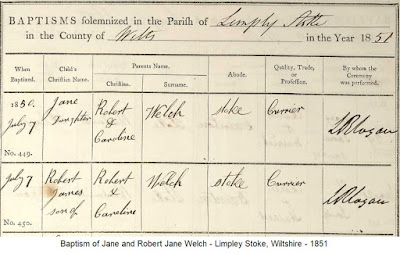 Now that I had Worldwide access to Ancestry I searched the Census records for Canada and found a widowed Caroline Welsh in 1871 together with her two sons and daughters, Almyra, Caroline and Louisa, who had been born in Canada.

Based on the children’s births, the family must have immigrated to Canada between 1851-1855. James appears to have died some time prior to 1871.

Caroline has also been noted on the 1881 and 1891 census. In 1891 she was listed as Carry Welch, living with her married daughter, Carrie Freeman.

Caroline died 28 May 1893 at Elgin, Ontario of paralysis and is buried at St. Peter's Church Cemetery, Dunwich, Ontario.

So, after nearly 30 years, through collaboration, traditional research and more recently using DNA and specifically shared matches I am confident this is our Caroline and that we have sufficient evidence to now account for all of John and Sarah’s children.

Having confirmed the paper connection, we have also been able to identify shared matches back to Caroline’s grandparents, John Forward and Hannah Mills.


My cousin, SH and dad’s third cousin, PA have shared their AncestryDNA matches with me and this has been really beneficial. This matrix shows who matches who within the cluster of our shared matches. 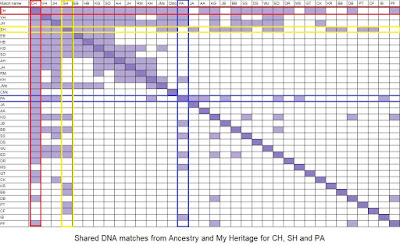 I’ve also put together a consolidated tree of our confirmed matches back to John Forward and Hannah Mills through the various branches of the family.


The icing on the cake has been finding a triangulated segment on Chromosome 16 back to Sarah’s parents, John Forward and Hannah Mills, through Sarah’s line and that of her brother James.

Although we have over 40 matches between us, most have tested at AncestryDNA - it would be wonderful if we could compare our results further at a site with a chromosome browser such as MyHeritage or at Gedmatch!