I’ve been working on my family history for nearly 40 years and have an extensive family tree.

Like many, I have a few brick walls and hoped that DNA would help progress some of those lines.

I’m fortunate that I’ve been able to test both my parents, so am able to focus on their results and I'm using my Dad, Colin's results in this blog.


What was my DNA Goal?

Dad has 28 matches in the 3rd cousin range at Ancestry and I was able to place all of them in our tree. All but 2 of these matches are on his paternal line.

However, once I got to the “4th cousins” range I started to have quite a few unknown but still reasonable sized matches.

Dad’s highest unknown maternal match, Penny, shared 55cM across 5 segments and was in the 4-6th cousin range and they had 8 shared matches. Of course, very few had trees!

So, who is Penny? Who are this group of unknown matches and who are our shared ancestors?  Penny doesn’t match with either of dad’s other “close” maternal cousins.

To answer these questions, I used a variety of DNA tools.

I had tried the Leeds Method, a process where you divide your matches into four coloured quadrants, generally representing each grandparent line. It’s not completely accurate 100% of the time, especially when you are dealing with more distant matches, intermarriage and/or endogamy.

In summary:
As you can see, I actually went beyond the third cousin limit, as I was focusing on dad’s maternal side and these shared matches with Penny, and I had noticed another group of matches appeared, that overlapped with some already in Penny’s group.

On reflection, this is very similar to doing Ancestry’s coloured dots - but they were not available when I I did this!


I did some manual clustering of these matches using those from the “Shared Matches” tab for each match at Ancestry and also the In Common With or “ICW Report” available from DNAGedcom and placed them into a grid in a spreadsheet to compare who matched with who. I focused on the orange and yellow group from the Leeds spreadsheet and found a further group of smaller matches.


Auto Clustering organises your DNA matches into shared match clusters that likely descended from common ancestors. Each of the coloured cells represents an intersection between two of your matches, meaning that both individuals match you and each other.

Each colour represents one shared match cluster. Members of a cluster match you and most or all of the other cluster members.

I ran the Auto Clustering tool that is available through DNAGedcom which is known as the Collins’ Leeds Method. This presented me with a very similar group of matches to those using the Leeds Method and my own manual clustering, showing 3 distinct groups but with some overlapping matches that you can see in the grey boxes.

You can access other Auto cluster tools through Genetic Affairs, My Heritage and Gedmatch.
There is also a free tool available called Shared Clustering which you can download to your desktop.

One of these matches, Rob, had a tree and was in dad’s Thrulines™ as a descendant of Dad’s 3 times great grandfather, James Cooper.

Thrulines™ uses Ancestry trees to suggest how you may be related to your DNA matches through common ancestors.

When I looked at dad’s Thrulines™ for James Cooper, there were in fact another 4 matches who all appeared to be descendants of Richard Cooper, a brother of dad’s 2 x great grandfather, Anthony.  These were much smaller matches and I may never have come across them as they would be too small to appear in any of dad’s shared matches.

Note, originally these matches would have appeared in Thrulines™ with “dotted” lines around their boxes (like the box for Eleanor) as I did not have all their lines in my tree at the time. Since I’ve now added them to my tree you can see they now appear as solid lines around each person.


The above image was my tree at the time I started this review of matches, showing the Cooper line back from my paternal grandmother, Esther through her father, Arthur Samuel Rake, his mother, Sarah Ann Cooper, her father Anthony Cooper and his parents, James Cooper and Sarah Martin.

A Thrulines™ icon for a person in your tree indicates you may have DNA matches that are also related to this person.

If you don’t have any ThruLine icons on display, you may need to click on the DNA Discoveries button on the left, select the person/kit, which will then update your tree with any Thrulines™ for that person's ancestors.

What did I already know?


I knew that Anthony Cooper and his brother, Richard had both been born in Oxford, the children of James Cooper and Sarah Martin who had married in 1808. I had also found baptisms for two sisters, Sarah and Amelia. I had no further record of the family until Anthony married Fanny Yeeles in 1842 in Southwark, London.  I had also found Richard’s marriage and his family on census records, however no further record of their parents, James and Sarah or either of their sisters.

So now it was a matter of confirming these Thrulines™ hints and contacting all these shared matches and hoping for some replies to see how they connected back to the Cooper’s.

I was in luck.

I heard back from two of the matches fairly quickly, including the manager of Penny’s kit. Both were keen to try and work out our connection and although they both had reasonable trees, we couldn’t see anything obvious initially.

Penny’s kit was managed by Jordan, her future son in law, and he also managed her two children’s kits who were also shared matches. While we both had Cooper’s in our trees, we could not place Penny’s family, the dates/locations did not work.

Nancy, the other match who replied, was in Canada and she had multiple unlinked trees. However, based on a shared match, she was able to determine which of her lines we matched, but her tree stopped at her great grandparents who were born in London and immigrated to Canada. This was however promising as we knew our Cooper’s had moved from Oxfordshire to London.

I started by building a Quick and Dirty Tree for Nancy’s grandmother, Dora. Her parents were Edwin Covey and Catherine Clements. While the name Clements was not in my tree - it did ring a bell.

As I was building Nancy’s tree and reviewing some of the records. I also noticed that at the time of the 1851 census, Valentine and Catherine were living at 84 Paradise St.

It is where Anthony’s daughter, Sarah Ann Cooper, dad’s great grandmother was born in 1851.

So I started to examine the various documents I already had on this family and noticed:

John and Sarah Hurley were the witnesses at Anthony’s marriage to Fanny Yeeles in 1842.


Catherine Clements was a witness at Sarah Ann Cooper’s marriage in 1868.

This John and Sarah Hurley seemed to be popping up everywhere!


I then looked for John and Sarah Hurley on census records and noted that they were also living nearby at 86 Paradise St in 1851, John was born in Ireland and Sarah's birthplace is noted as Islip, Oxford!

Further research revealed that Amelia Smith who was also residing at 84 Paradise St in 1851, was Amelia Cooper, having married James Smith in 1836. Witnesses at their marriage were also John and Sarah Hurley!

So who are John and Sarah Hurley?

I found John and Sarah Hurley, along with Dennis Hurley, Thomas Hurley, Catherine Hurley and Anthony Cooper - all living together in Paradise St at the time of the 1841 census!

My theory is that Sarah Hurley is Sarah Martin - wife of James Martin, mother of Anthony, Richard and Amelia. I’m not sure what happened to James, but Sarah appears to marry or have a relationship with John Hurley (I haven’t been able to find a marriage) and they have a further two children, Thomas and Catherine. 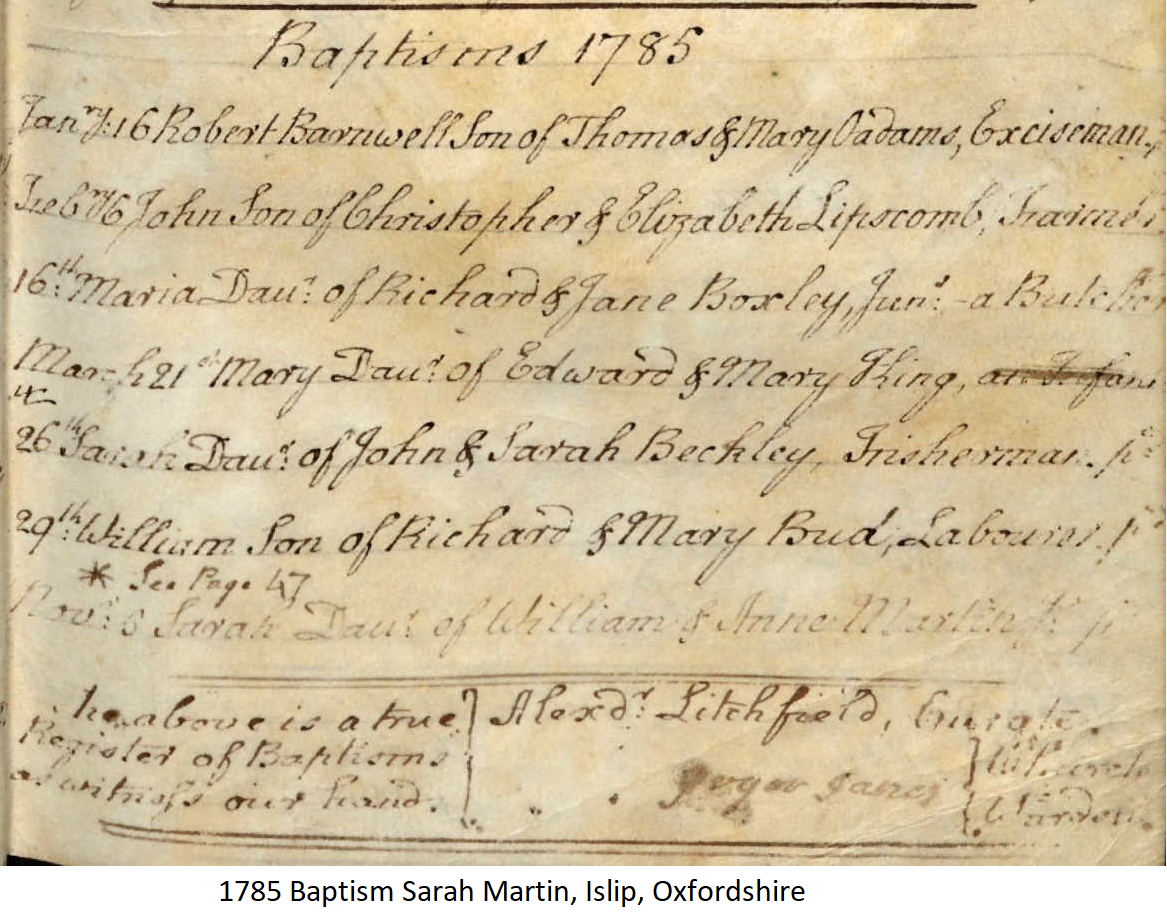 I had previously found a baptism for Sarah Martin at Islip, Oxfordshire, and now based on the census, these other records, and DNA, I’m confident that this relates to Sarah and can now take her line back a further generation by confirming her parents as William and Ann Martin.

Sarah Hurley aged 66 (wife of John) of Paradise St was buried 13 June 1852 at St Mary Rotherhithe. John Hurley appears to “marry” again as he is in later census with a new wife, Mary.

I also subsequently found the baptism for Sarah’s first husband, James and was also able to take the Cooper line back a further three generations through various parish register records in Oxfordshire.

This is our updated family tree back from dad’s great grandmother, Sarah Ann Cooper.

You can see Thrulines hints (blue icon) on many of her lines.

This image shows Dad’s updated ThruLines™ for Sarah Martin - he now has 16 confirmed matches, through three of Sarah’s children. 6 of these are through Anthony (which is our line) and there are now 7 matches on Richard’s line and we have 3 through their half sister, Catherine Hurley’s line.

I have since heard back from some of the other matches and others I have been able to build out their trees, so Dad now has over 20 Confirmed DNA matches at Ancestry on this line - including Penny!

This image shows how each of these matches fit into the tree back to Sarah Martin and shows how many centimorgans they each share with dad.

So how did Penny fit into the tree? As it turned out, after working together with Jordan, sharing our DNA matches, building trees and using the What are the Odds "WATO” tool at DNA Painter, he discovered that her Cooper’s were on her maternal line and had nothing to do with the Cooper’s in our tree. They were just there to confuse us!

Penny is a 4th cousin once removed on her paternal line, being a descendant of Anthony’s brother, Richard, through his daughter, Henrietta.

Nancy, our other helpful match is a half 4th cousin, through Anthony and Richard’s half sister, Catherine Hurley.

So for now, while we have tree triangulation, unfortunately, none of these matches have uploaded to
any of the sites with a chromosome browser...so that’s the next goal for this group - to compare the shared segments!
__________

The above was presented as a webinar to members of the Society of Australian Genealogists DNA Intermediate Research Group on 16 May 2020.
By Vicki Hails at May 23, 2020
Email ThisBlogThis!Share to TwitterShare to FacebookShare to Pinterest
Labels: Auto Clustering, DNA, genetic genealogy, Leeds Method, ThruLines™, WATO